A Murder of Corvids

So you may thinking…… what the heck is a CORVID and what is a MURDER of them?

Corvidae is the Latin name for a family of birds which contain crows, ravens, rooks, jackdaws, jays, magpies, treepies, choughs and nutcrackers. This family of birds is found world wide with the exception of the tip of South America and the polar ice caps. They are considered to be the most intelligent of birds and  and have the ability to make and use tools.

So why are they associated with murder?

Through folklore and mythology the raven and the crow have been associated with death and war. The very basic reason for this is their diet. Crows and ravens in particular are known to eat almost anything and are considered scavengers. For this reason it was not uncommon to see these birds feeding on the deceased on the battle fields of war. They have been shrouded in mystique as well as many falsehoods in ancient cultures. 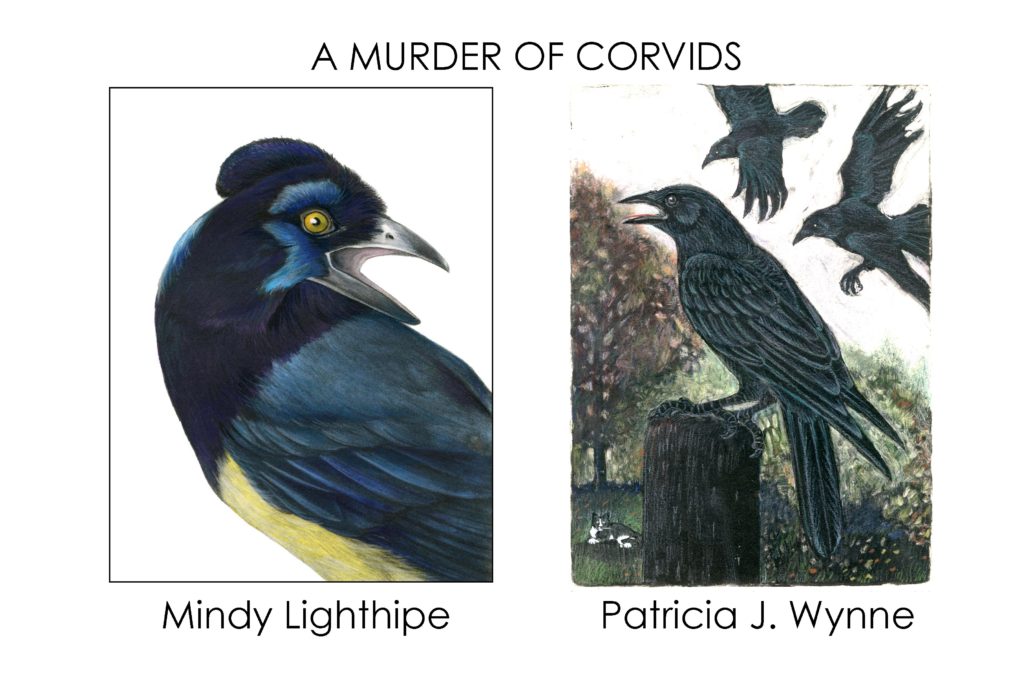 Come visit us at the Salmagundi Club September 23-29, 2019! We will be at the gallery during the times posted and would love to see you!

It is with great pleasure that I announce a joint exhibition of a “Murder of Corvids” by myself, Mindy Lighthipe and Patricia Wynne. This collaboration has taken place over the last 18 months. We decided to do the Corvid family as it gave us such great variety and interest to draw and paint. I opted to do some of the tropical corvids which are more brilliantly colored along with the traditional raven and the endemic Florida Scrub Jay in my state of Florida. Patricia opted for European and Eastern species. We will have a selection of solar etchings, original paintings and a “folio” of 12 “Murder of Corvids” Solar Etchings offered as a complete set. The show is not only limited to the Corvid family but will also show “Birds of a Feather”.  If you are in New York City, the show is being held at the Salmagundi Club Patron’s Gallery September 23 to 29, 2019. Gallery is open Monday-Friday 1-6pm and Saturday-Sunday 1-5pm. The artist reception is Sunday, September 29, 2019 1- 3pm. The Salmagundi Club is located at 47 Fifth Ave. New York, NY 10003. info@salmagundi.org