I have the wonderful opportunity to announce that my Nature’s wisdom Oracle cards from Schiffer Publisher is finally arrived. About a year ago my book, Mother Monarch was released and they offered me the opportunity to write and illustrate a deck of oracle cards. I had never embarked on a project of this kind so I needed to do some research.

According to Wikipedia “Oracle card decks claim to provide insight and positive outlooks to people. They are conceptually similar to divinatory tarot cards, but they are often not divided into playing card tarot cards. Unlike the Tarot, oracle cards are not known to be used for card games. Oracle decks often differ in the number of cards. Common themes used in oracle card decks involve the power of positive thought and metaphysical beings such as angels, fairies, mermaids and unicorns. These cards are sometimes called “fortune telling packs”. They often lack what is often seen as the “darker” images of traditional Tarot Cards.

I have always related to nature and find that there is so much to be learned from Mother Nature. As I began to think more and more about my deck of cards I started to make a list of bugs, beasts and botanicals that had special meaning to me. I read lots of books and researched my way through the internet to come up with the imagery, symbolism and folklore that I felt would help others gain insights into their daily challenges, future aspirations and past decisions. I came up with 48 cards that I believe will help to guide people along the path as nature intended us to walk. I will periodically post each image and you can read the information I have in the book.  My first card is 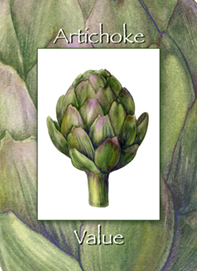 The artichoke symbolizes value. It is a perennial plant belonging to the thistle family.  The flower or the head of the plant is commonly referred to as the heart. In Greek mythology Zeus fell in love with a beautiful woman named Cynara. She missed her family so much that she would sneak back to earth. When Zeus discovered this, he banished her to earth and turned her into an artichoke. In today’s cuisine, the artichoke is considered a delicacy.  The exterior is tough and only a tiny portion of the plant is edible. It takes a lot of preparation and cooking in order to make it tender. Each leaf is peeled off and must be scraped off the flesh of the plant.

The artichoke challenges you to find the value of your present situation.  Look deep inside your heart and see if there is something special hidden within the harshness of the exterior. The work involved in the discovery may uncover something of great value to you. 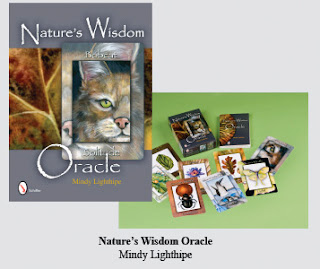 If you are interested in your own deck of Nature’s Wisdom Oracle cards you can purchase on Amazon:

I hope that you enjoy them!
Cheers,
Mindy