The next card I will share from my Nature’s Wisdom Oracle Deck is the Scarab Beetle. My “bug” friend Adam Fleishman of Comet Moth Sight & Sound inquired about my deck of cards and wanted to know more about the scarab. So this is for you Adam! 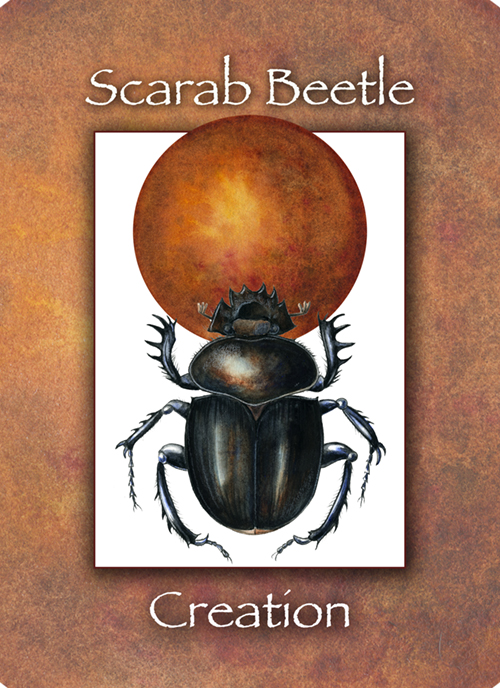 The scarab beetle belongs to the family called Scarabaeidae.The dung beetle is a type of scarab beetle that eats freshly laid fecal matter. With exact artistry, it uses its legs and mouth parts to sculpt dung into a huge circular ball. It then rolls the ball on the ground and deposits it into a burrow. It is amazing that it has the ability to roll a ball of dung that can weigh up to fifty times its body weight. The female lays her eggs in the ball and when the larvae hatch, they use it for food.

In Ancient Egypt the scarab beetle was worshipped under the name Khepri. The name means ‘he who has come into being’. Egyptians believed that it represented their sun god, Ra. He was the Egyptian god who rolled the sun across the sky and buried it each night.   As a self created deity, Khepri became synonymous with their creator god, Atum. It became an important symbol of creation, resurrection and everlasting life.

The scarab beetle shows you how to be creative, making something out of what at first appears unusable. It is the greatest of recyclers.

Purchase your own Deck on Amazon